Oh MY, What a Creative Bunch You All Are!

Folks were challenged to create a back story for “Pier” images by photographer Gail MacLeod.   25 stories were submitted.

As promised, the stories are published below.   We’ve picked 2 stories as the BEST.  And several others for Honorable Mention.

The stories are heart-felt, funny, complex, insightful and perplexing.   They simply wowed us!

First are the pics, then the two BEST & then the rest of the other stories.

Thank you all for participating.

Leave comments – let me know what you think. 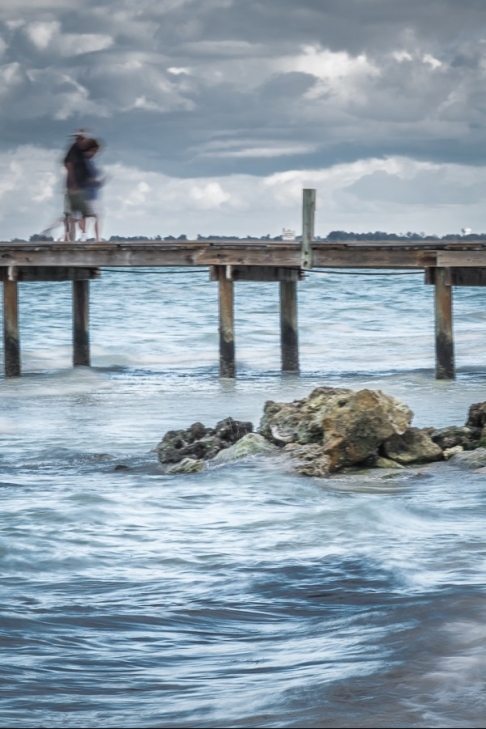 Title:  On the Timelessness of An Old Pier

There are some times in our lives that really are magical, I believe.   It was a hot, sweltering summer – after the weatherman and the National News said it was one of the hottest on record.  The wind when it came, was like the hot breath of God, rolling in on the afternoon tide.  The water was the coolest place, of course.  The sea spray was a deliverance from the heat and when a storm found its way in from the sea the locals called the blessed rain angel tears.   “When the dry earth cries out” my father used to say, “someone above weeps out of pity”.

We spent the whole summer at that old pier, I think.  Cooling our ankles in the water, shouting into the great vastness – we did all.  I do not think we recognize magical times until they are passed – that is part of their charm – but upon reflection the times at the pier were among the most magical of my youth.  Even today whenever I see a pure white egret, I am brought back there, and I am lost again in the strange liminal times on the pier.

Tied for Best, her writing captures the sense of isolation and searching that most have experienced.

She is new in this city.   Last month she came to this city by herself for a better job opportunity.  The fast lifestyle and the busy work make her feel lost.  One time she went to the seashore, the sun was hidden behind clouds and a chilly wind made her face itchy.  Everything looks just for her sad and lost mood.  Suddenly she dropped her bag and ran onto  the bridge to the middle of the sea.  At that moment she couldn’t hear anything but wind.  No one knows where she is running to and why she is running but they know she must be chasing something.  To her dream, maybe.  Life is like running, the easiest but difficult.

Now for the Rest of the Stories

Honorable Mention because:  Been There Done That

Two brothers were told that if they got good grades in school their dad would take them to the pier to go fishing.  Unfortunately neither were very good in school, but there were resourceful.  The older brother knew the way to the pier and the younger brother saw where dad kept all the fishing gear.  In the morning they left a note on the table “gone fishing” and left.  Only when they got there neither had bait!

Cindi J.    Story Title:  Fishing for Finds with a Friend

“You know what’s gross?”  Crusty fish bait in the evening!”  Kids can find treasures, too, where adults won’t probe.  New hooks, lures, lengths of strong fishing line and the occasional abandoned pole.  Put that stuff together, you’ve got a great fishing trip!  If you don’t mind the scent and getting your hands dirty, the pier can land you the best seat in the house for a sight of a shark, skate, flounder or…….just a perfect view of the edge of earth.

What kind of a pier is this?   Fishing- Fishing – Fishing!   I thought there would be a restaurant at the end of the pier.  I’m hungry!

Teresa S.   Story Title: Beauty is in the eyes of the Beholder

Honorable Mention because it’s way too relevant to me

Trying to take the perfect selfie, she tried multiple poses.  Finally she exclaimed, “You can’t see my double-chin now!”

Honorable Mention because it is the most perplexing; after much pondering I think it means people have always done dumb things to pass the time – whether it’s lopping poppies or taking selfies.

It was said that the final king of Rome, Lucius Taquinius Superbus (535-495 BC) used to ride around on horseback lopping of the heads of poppies with his whip as a sign of activity.

Honorable Mention because sadly it’s all too true.

The guy on the right (in the white bucket hat) has just about had it with young beach-goers and their cell phones.  He has turned to another friend near his left shoulder to comment “Doesn’t anyone just enjoy the ocean anymore?   I guess they don’t know they have had fun until they take a picture.”

I think she is looking up at a fly by advertising plane with a funny message on it that caught her eye.  Just be careful not to take a step backward off the pier!

Tired of watching all those guys fish….and fish….and fish….. Then the pelicans came!   Swooping, & diving & hoping for fish.   Finally one dove & came up with a HUGE fish – how would he swallow it?   I had to get a photo….out came my phone and he flew right for my head –  SNAP – Got It.   “The Pell-i-can, the Pel-i-can, his beak can hold more than his belly can”.

What we can’t see out of the frame – a propeller plane with the banner:  “Marry Me?”  Both woman with phone and man looking skyward observe the proposal taking place below the plane.   Woman is covering her mouth obviously surprised, man is kneeling holding her hand.

In a beautiful sunny half past noon a woman rushed by.   These was a balloon raising today.  It happened every 10 years.  This one was special because her husband Robert and her twins, Karo & Lela were riding on it, but Robert convinced her it was safe.  Now she thought as she rushed past the people, now as time to take one photo.

The day was too warm for Bob and the woman with the phone too loud.  He grumbled and frowned but no one noticed.  The loud woman was finally leaving the pier when she slowly approached Bob and showed him the shot she had taken of him from the back looking at the ocean and he finally saw the beauty she had seen.

She went to the sea.   He’d always loved the sea.  She’d never been fond of the water herself.  The waves made her nauseous and the fish smell made her think of death.   But his last wish was to be buried at sea.  So she braved the waves and the smell of death to honor him.  Now her task was done and she was safe on land once more.  She turned her back to the sea and lifted her eyes to the clouds knowing he was smiling back and home at last.

It’s a beautiful end of the day at the pier. The egret has been keeping on an ayes on all the visitors. “OH” he says, “I think one of them sees me”. He decides to stay still until they leave. There’s always an interesting group of people who come to the pier and the egret loves to people watch. 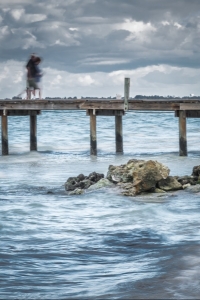 Blurry People on The Pier

Michael L.      Story Title: Do You Come Here Often?
I am wondering what a good pick-up line for a pelican is? “Are you new to the pier? Do you come here often?

Nancy S.   Story Title:  Waiting for That Special Morsel
These darling birds are patiently waiting at the pier for a small morsel to make them happy – before a storm arrives at the pier.

Gail D.
Mr Pelican has just returned from his annual fishing trip with the guys. His first words to his waiting wife are about the one that got away. “Honey, it was THIS big!!

Kim S.   Story Title:  What’s for Dinner?
The one pelican is on the beach, his buddy “Bill” comes flying in – “What’s for inner Will”

After her monthly Mackerel book-club breakfast, Debbie rendezvous with her beau, “Hey Alan! I just previewed next month’s book; it’s ‘The Captain’s Tiger’, a book of sea-faring poems by Captain Roy Sorge, and one of the poems is about us called ‘Have You Ever Watched a Pelican Fly?” We’re famous! “Well”, says Alan, “Always nice when humans share beautiful insights; I’d like to read that one!”

“Have you ever watched a Pelican Fly?

On a sunny morn, near island White
A favorite place of mine
I drop the hook at fathoms four
And watch the pelicans fly.

Stoically standing upon the rocks
Two by two, in dirty brown frocks
These fellows are not swans
But tighten his shrouds and taken to wing
This fellow’s a prince, king of kings.

He may silently glide o’er the crest of a wave
Turn, rise into the breeze
Roll, furl, and with bullet-like speed
Plunge into the depth of the sea.

Now if you’re with the one you love
Under the azure sky,
Sit quietly, press hand to hand
And watch the pelicans fly
For
Then they’ll dance in precision flight
A ballet just for you.
Of twists and turns and climbs and dives
Up o’er the ocean blue.
May I never lack for wonder
At the majesty of life
May I sometimes fly with pelicans
To the music of their fifes.
May I never think in lowly terms
Of that bird upon the rock
For he flies with elegant beauty
Among the angel’s flock.